Bookmark this on Delicious    Recommend to StumbleUpon

Click here if you want to know more about the source and format of these pages.

This page is "browser friendly". Make your browser window as wide as you want it. The text will flow nicely for you. It is easier to read in a narrow window. With most browsers, pressing plus, minus or zero while the control key (ctrl) is held down will change the texts size. (Enlarge, reduce, restore to default, respectively.) (This is more fully explained, and there's another tip, at my Power Browsing page.)

Have you ever had to enter a registration key, or similar, into a computer? And been asked to type something like "abc0ldef5S"?

Even though you can tell that the string ends "5S", it is very easy to misread those two characters.

And it is all so unnecessary. In this tutorial I will give you two functions which you can splice into your own programs. The first will take any string using only 0-9,a-z and A-Z (all inclusive), and "translate" the string into something of about the same length, but something containing no zeros, no "oh"s, no ones, no "ells". (A few other ambiguous characters are also filtered out.)

The second function will take the output of the first function, and turn it back into the original string.

I hope you find the functions useful. Even if you have no immediate need of the functions, you may find things present in the sourcecode which help you become a more capable programmer.

At the moment that's all I'm going to say here... but there are many notes explaining further, embedded in the source code... a very good place for this sort of thing.

Here is the code. You can also download a zip file with all of the files to work on PSD21 in Delphi. The .zip also includes the .exe file. It was developed in Delphi 4, but should work fine in other versions of Delphi, too.

For the sake of a pretty picture, here's what the demonstrator application developed in this tutorial looks like. The "Ever had..." a the top just introduces what the application is for. A user entered the "A test string...", and then clicked the "Convert Original..." button. After that, the text "pA texEt xE..." appeared in the third black- text- on- white- background section. This was the test string converted to a string without ambiguous charaters. (The "s" in "test" having, for instance, been converted to "xE". ("s", poorly printed, can look like "5".) When the application is finished, which it wasn't when the screenshot was produced, the second button ("Convert from...") will re-convert the converted string back into the original plain text, complete with ambiguous characters. 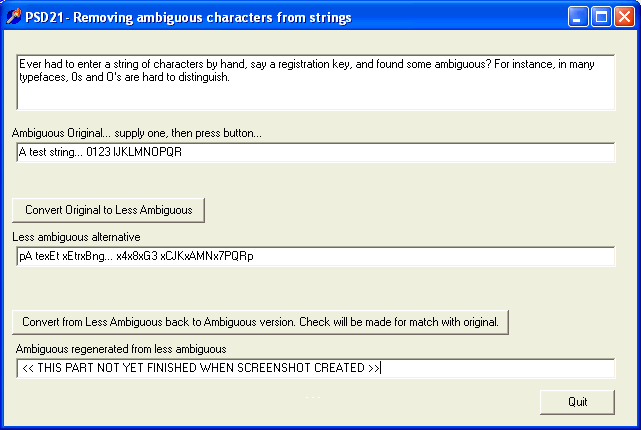 Site Map    What's New    Search This search merely looks for the words you enter. It won't answer "Where can I download InpOut32?"

Click here if you're feeling kind! (Promotes my site via "Top100Borland")

If you visit 1&1's site from here, it helps me. They host my website, and I wouldn't put this link up for them if I wasn't happy with their service. They offer things for the beginner and the corporation.

Ad from page's editor: Yes.. I do enjoy compiling these things for you. I hope they are helpful. However... this doesn't pay my bills!!! Sheepdog Software (tm) is supposed to help do that, so if you found this stuff useful, (and you run a Windows or MS-DOS PC) please visit my freeware and shareware page, download something, and circulate it for me? Links on your page to this page would also be appreciated!

Click here to visit editor's freeware, shareware page.
Link to Tutorials main page How to contact the editor of this page, Tom Boyd


If this page causes a script to run, why? Because of things like Google panels, and the code for the search button. Why do I mention scripts? Be sure you know all you need to about spyware.